The Panthers track club had quite a few kids attend CALTAF in June, in an attempt to make the Legions Alberta -NWT team, however none were chosen.
Being chosen to a Provincial team is one of 2 ways to attend Legion Nationals for track and field.
The 2nd way is to attend as a club athlete if you have achieved standard in any event.

Joshua Suelzle went in 3 U18 Youth throwing events. He placed 15th in Discus (a fault and 2 throws 31.07m/34.39m) and 14th in Shot Put with a throw of 12.11m. Neither event did he beat his qualifying seed distances, which had him placing first at CALTAF and High school Provincials (SP seed: 13.79m & Discus 39.4m) Joshua had a great day at Javelin, smashing his old seed and setting a new personal best 6.5m further, finishing 11th with a throw of 50.61m.

Aayden Callan bombed the discuss 41.39m, toppling his precious PB of 40.26m (set at ASG trials), coming in 9th in the U16 Midget category.

The senior program officer for the Royal Canadian Legion Lia Taha Cheng said in her email, “You have earned your spot to compete at these Championships through your hard work and dedication….We are excited to welcome you as one of the best youth track and field competitors in Canada!”

The Panthers track club is very proud of these athletes initiative to attend and compete nationally and applaud their hard work and success. 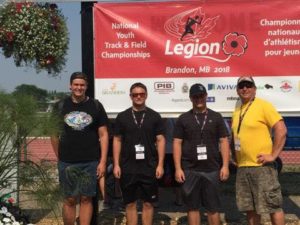